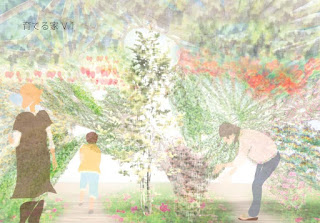 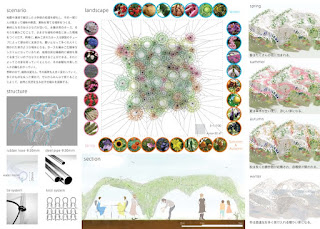 In response to a call for a design proposal for a small community house to be constructed at temporary housing areas in northeastern Japan, we have submitted our design. This event was organized by the 5 established Japanese architects (Toyo Ito, Kengo Kuma, Kazuyou Sejima, Riken Yamamoto, Hiroshi Naito). Instead of designing a building, our idea was to design an environment where the shelters’ residents could come together to grow plants and nurture the spirit of community; as a result, they grow architecture.
Posted by Obuchi Lab at 23:12

This video shows the current state of our Stick team's project. Their ambition is to develop a manufacturing system that integrates the potential of mass-production, which optimises efficiency in terms of the amount of material and production time, and the logic of mass-customisation, which maximises the possible variations in terms of formal outputs. Their project explores the issue of discarded logs in forests in Japan. Due to the increase in cheap lumbers being imported from Europe and North America, Japanese forest industry has lost its grip on competitive global lumber markets. As a result, many forests have now become abandoned causing problems for both their economy and ecosystem. The project also aims to bridge a link between Japan's wood working traditions and computational fabrication techniques.

This project is built on Frei Otto's experiment on Form-Finding, which is a formal and structural optimisation process based on material's inherent distributional logic.
Posted by Obuchi Lab at 14:51